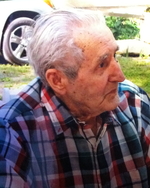 Floyd “Bill” Green of Ellenville, NY passed away Wednesday, November 21, 2012 at the Ellenville Regional Hospital. He was 94 years old. Bill was born on February 7, 1918 in Ellenville; he was the son of Arthur and Hester (Cook) Green.

Mr. Green had served with the 861st Field Artillery Battalion in the United States Army during WWII. He was honorable discharged in 1945.  Bill was a plumber by trade and had worked for Thornton Plumbing and Heating in Ellenville until his retirement in 1983. He enjoyed camping and traveled cross country several times with his family. Later on in life he took up fishing. Bill was a loving husband, father and grandfather and will be sorely missed.

Mr. Green is survived by his wife of 65 years Marjorie (Scraggs) Green, their daughters Peg Becker and her husband Richard and Karen Rosselli and her husband Michael, his sisters Dorothy O’Neil and Catherine Bennet and his two grandchildren Jennifer Stanforth and David Rosselli.

Bill was predeceased by his brothers Melvin, Henry and Arthur Green and his sisters Mildred Sutherland, Marion Helgesen, Beatrice Irwin and Freda Wright.

Visiting will be held Friday, November 23rd from 2-5 PM at Loucks Funeral Home, 79 N. Main St., Ellenville, NY. A Celebration of his life is scheduled for Saturday, 10 AM at the funeral home. Burial will follow at Fantinekill Cemetery.

In lieu of flowers contributions may be made in Bill’s name to the Ellenville United Methodist Church, 85 Canal St., Ellenville, NY 12428.

To order memorial trees or send flowers to the family in memory of Floyd Green, please visit our flower store.