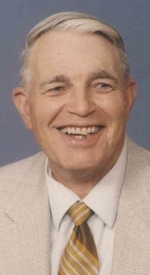 Son of the late Augustus Sahler and Marion Schoonmaker, he was born April 9, 1932 in Kingston, NY. Frank married his high school sweetheart, the late Patricia Wittmer Sahler, on September 14, 1952.

Frank was a graduate of Ellenville High School where he was a star basketball player. Frank was a graduate of Cornell University where he majored in agriculture and economics. He was 1st Lieutenant in the United States Army service in Germany during the Korean Conflict. Upon finishing his military service he established himself as a local farmer (with a concentration of growing potatoes and sweet corn). Frank was a horticulture instructor for 28 years for Ulster County Community College and at the Woodbourne and Sullivan Correctional Facilities. He worked with nearly 100 municipalities, local organizations, churches and synagogues doing town wide beautification projects. He served as the Supervisor for the Town of Wawarsing, Wawarsing Town Councilman, a member of Ellenville School Board and Chairman of local Economic Development Council. Frank was also a member of the Ellenville Planning Board, the Town of Wawarsing Republican Committee, as well as may other local organizations.

Frank had a deep love for his wife and family. He loved hunting and fishing, traveling with dear friends, holiday gatherings and helping others.

Frank is survived by his loving family, including his brother, James Sahler and his wife, Diane; his children: Robert Sahler and his wife, Rita, Mark Sahler and his wife, Elizabeth and Susanne Sahler; daughter-in-law, Louise Travis; his grandchildren: Aja, Lee, Michael, Miriam, James Jr. Jessica, Emily, Teddy and his great-granddaughter, Eve; his nieces: Erica, Christy and Duska and several cousins, nieces and nephews. He is predeceased by his wife, Patricia and his son, James Eric Sahler Sr.

In lieu of flowers, donations in Frank's name can be made to Alzheimer's Foundation of America, 322 Eighth Ave. 7th Fl., New York, NY 10001.

Arrangements were under the direction of Loucks Funeral Home; for further information please call 845-647-4343 or visit www.loucksfh.com

To order memorial trees or send flowers to the family in memory of Franklin Daniel Sahler, please visit our flower store.