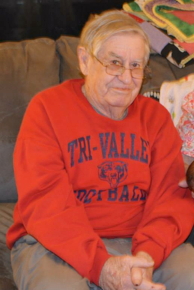 Mr. Caruso was a veteran of the United States Navy having served aboard USS Tarawa. He was honorably discharged in 1956. James was a long time employee of Ellenville Auto where he was an auto parts salesman. He enjoyed woodworking and during his younger years bicycling, bowling, hunting, camping and horseshoes.

James is survived by his wife Elizabeth “Betty” Caruso whom he married on Aug. 2, 1953, their children; Stephen, Randy, Todd, Wendy Caruso, Melody Arroyo and Derrel Caruso along with numerous grandchildren and great grandchildren who he absolutely adored. He is also survived by his sister Pauline Connors.

Visitation will be held on Tuesday, January 5th from10am to 12pm with a celebration of his life immediately following at Loucks Funeral Home.  Burial with military honors will be at the Sullivan County Veterans Cemetery.

To order memorial trees or send flowers to the family in memory of James Caruso Jr., please visit our flower store.