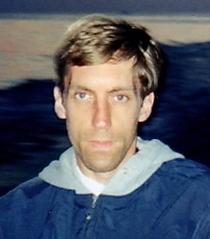 Joshua Richard Peters, 43, of Cragsmoor died Wednesday evening, May 20th.  Josh, while cutting the grass with a push mower at the Cragsmoor Fire House, had a Grand Mal Seizure, fell into a fill pond and drowned.  Josh’s lifelong Epilepsy disorder was a result of birth trauma.

Josh was born on September 11, 1971 in Ellenville, New York.  He lived at home with his parents and close to his only brother, worked in his family run supermarket, Peters Market in Napanoch, and enjoyed life to the fullest in his favorite places:  Cragsmoor, Peters Market, his Lake Ontario summer vacation home and the Adirondack North Country where his maternal family relatives lived.  Josh graduated from Orange-Ulster BOCES where he met his closest lifelong friends, Kathy Wood, Sandy Scheuerman and Tommy Dauphinee.

If there is an “all in one” person, it is Josh.  Josh’s innocence, purity, gentleness, love of people, zest for life and his ability to make every person feel special, touched the hearts of so many people.  Peters Market was the center of his life where all the employees at his Market, were his extended family. Customers entered Peters with an exuberant welcome from Josh whether it be a Bear Hug, a verbal exclamation (!) or an exchange about a special event in their life or his.  At his home in Cragsmoor, there was always an exhilarated hand wave as one drove by or the “Joshua Welcome” if walking by.   And Josh knew everyone’s name.  Josh, with his impeccable memory, was the “go to” person for details when no one else could remember.  And he was so fortunate to have as neighbors, Paul and Debbie Gibson Dwyer who loved him and looked after him.

Josh’s highlight of his week was Wednesday nights when, as a member of the Cragsmoor Fire Company, he participated in the drill/work night preparing for an upcoming event or cleaning up after one.  He was proud to be one of the many hard working volunteers that protected his community and served his community with delicious pancake breakfasts.  He wore his uniform with pride at the parades and ceremonies he attended. And at the annual Firehouse dinner, he sat and ate with his fellow fireman and then did what he looked forward to every year, danced the night away.

Josh enjoyed a full life both in fun and work.  And to Josh work was fun.  He cut the grass and would sing at the top of his voice while listening to his music through his ear phones.  Josh was always working side by side with his family whether it was yard work, flower gardening, cooking, cleaning, or caring for his cats and his brother’s beloved dog, Quinn.   And with Josh’s keen sense of observation and preciseness, nothing slipped by him if it was done incorrectly. He loved boating with his family, riding the surf with his brother and cousins, playing golf, watching Nascar racing, Jimmy Johnson and the dusty nights at the Middletown Race Track with his racing buddies, Fred Hart and John Stanger. He was an avid Mets and Giants fan.  And he cherished his time alone when he would read, write, play games, listen to music and talk for hours with his friend, Kathy Wood.

Josh is preceded in death by his grandparents, Charles and Bertha Mae Mance Peters and Almeda Forgette Forkas Hornbeck and Frank Hornbeck; His paternal Uncles Ralph, Roger and Raymond Peters. His maternal Aunt and Uncle, Barbara and Ralph Boyle.

A “Celebration of Life” Service will be held at 3:00 p.m. on Sunday May 31 at the Stone Church in Cragsmoor.  To accommodate the church overflow, exterior speakers will be used, chairs will be provided on the lawn and people might want to bring their own chair or blanket to sit on.  A Pot Luck Gathering will follow the service at Josh’s home in Cragsmoor.

When going to a gathering Josh would always say, “We’re going to be talkin’ and laughin’” ,and if someone was not there, “They were ‘missing all the good fun’.  Josh will be with us Sunday, talkin’, laughin’ and having the good fun….

To order memorial trees or send flowers to the family in memory of Joshua Richard Peters, please visit our flower store.