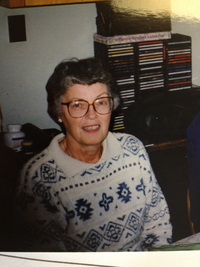 Kathleen J. Barnard “Pete” a life long resident of Ellenville, NY passed away on Tuesday, June 4, 2013. She was 85 years old. Kathleen was born on October 27, 1927 in Ellenville; she was the daughter of Deyo and Ellen (Terbush) Johnson.

Mrs. Barnard had earned a Bachelors Degree in Science from Syracuse University. She went on to be a vocal music teacher in Greene, NY before becoming the Vice President of William H. Deyo Lumber Co. where she worked for many years. On August 24, 1952 Kathleen married Harold Barnard at the Ellenville Reformed Church. Mrs. Barnard remained very active within the Church and eventually became an Elder.  Pete was also a member of the Garden Club and was very active in the community. She enjoyed fishing and golfing and was an avid photographer. Pete had a passion for Native American History and Culture and enjoyed sharing and teaching her family and friends about her discoveries.

Kathleen was predeceased by her sister Patricia Clinton.

Visiting will be held on Sunday, June 9th from 4-7 pm at Loucks Funeral Home, 79 N. Main St.,Ellenville. A funeral service is scheduled for Monday at10 am at the Ellenville Reformed Church, 188 Canal St., Ellenville. Burial will follow at Fantinekill Cemetery.

Contributions may be made in Pete’s name to the Ellenville Reformed Church or the Alzheimer's Association
2 Jefferson Plaza, Suite 103, Poughkeepsie, NY 12601-4060

To order memorial trees or send flowers to the family in memory of Kathleen J. Barnard, please visit our flower store.