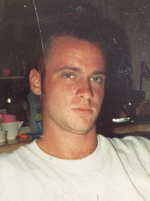 In addition to his father, Ronald leaves to cherish his memories his children Alissia, Devon and Jordan Lovelace, his sister Eva Johnson and her husband Stephen, his niece Andrea, his nephews Stephen Jr. and Tarik, his great nephew Christian, his cousins Robin and Judy Cruver, Lyle Yerkes and Victor Alvarado, his longtime girlfriend Sharon Conklin and his best friends Dave Freeland and Russell Kinch. Also surviving are many aunts, uncles, cousins and extended family and friends.

Ronald was predeceased by his aunt Nancy Chapin.

His family will be receiving friends on Wednesday, February 20th from 10am-12pm at Loucks Funeral Home, , Ellenville with a funeral service beginning at 11:30 followed by cremation. Ronald’s ashes will be buried at in Kerhonkson.

To order memorial trees or send flowers to the family in memory of Ronald C. Lovelace Jr., please visit our flower store.