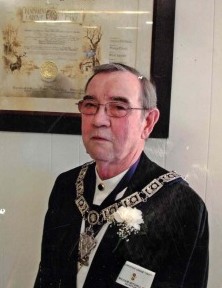 Bill was a lifelong resident of the area and resided in Napanoch the majority of his life. He was a Korean War Veteran enlisting in the United States Navy in 1953 at the age of 17, where he attained the rank of Machinist Mate Second Class. Upon his release from active duty in 1956, with an honorable discharge, he worked on the New York State Thruway for a while and in May of 1957 he started his 33-year career with the New York State Department of Corrections, retiring as a Lieutenant in 1990. During these years he also served as an Elected Assessor for the Town of Rochester and as an Assistant Scoutmaster for Troop 21 of Accord. Shortly after retiring from the NYSDOC, he began cooking for both the Elks and Saint Marks United Methodist Church.

Bill after joining the Ellenville Elks in 1979 became very active in the organization serving at various officer positions including Exulted Ruler for the 1997 Lodge year. He then became the lodge secretary serving for years until stepping down in 2017. In 2016 he was nominated and elected by the members as an honorary life member for his dedicated service to the lodge.

Bill was predeceased by his sister, Kim Nash and her husband Thomas and his sister-in-law, Kay Mitchell.

Due to the ongoing spread of COVID and the safety of the community the family will hold services privately.

A celebration of his Bill’s life will be held at a future date.

In lieu of flowers contributions may be made in Bill’s name to St. Mark’s United Methodist Church

To order memorial trees or send flowers to the family in memory of William "Bill" Mitchell Jr., please visit our flower store.